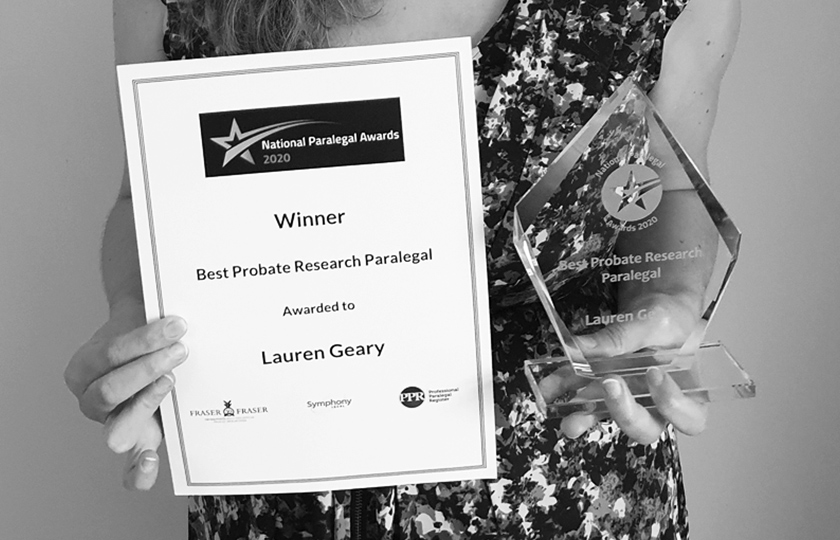 October 5, 2020 By Treethorpe_Admin Comments are Off

The National Paralegal Awards are incredibly important as they celebrate and highlight the amazing work of Paralegals within the legal profession over 14 distinct categories.

2019 was a particularly exciting year for Treethorpe with three Case Managers being finalists for the inaugural awards — and two for best Probate Researcher. The night did not disappoint as I proudly won the award for Best Probate Research Paralegal as Treethorpe’s Team Leader & Senior Cases Manager.

After winning Best Probate Research Paralegal last year, I knew I wanted to apply once again and prove to myself I could win for a second year. I feel it’s important to inspire my team to be the best they can be and lead by example, and I also wanted to share my experiences since last year with the judges.

Following on from the inaugural awards success last year, there were big plans for the ceremony to be held on the 18th September at The Grand Hall, De Vere Grand Connaught Rooms in Covent Garden, London.

After a surreal year for everyone with the pandemic still being so prevalent, I thought it was lovely to be able to look forward to enjoying the night. However, in August we were notified that due to government guidelines around Coronavirus, the gala dinner at the Connaught Rooms would not be going ahead. The PPR said ‘we are determined to bring you an event that showcases all the brilliant finalists and of course to crown our winners’.

Following this news, the PPR gallantly decided the show must go on and decided to hold a virtual awards ceremony. A production company was asked to produce the awards to take the show online.

Having never attended a virtual awards ceremony I was intrigued to see how the night would go. On the night, my partner and I decided to dress up in black tie, watch the awards with a bottle of fizz and food ordered in.

Our MC for the night and second year running was Actor Gary Hirst; who did an excellent job at hosting and keeping the event flowing. It was great to see so many of the other finalists and their supporters celebrating in their homes and workplaces — with over 500 people tuning in to watch the event!

In my category there were four other finalists who were also in the running for Best Probate Research Paralegal.

Having had so many examples of complex and interesting cases over the last year, it was difficult to choose which ones to include in my essay for consideration of the award. However, I decided to go with the cases which I thought showcased not just my abilities, but principles and passion for the job.

This must have struck a chord with the judges, as I managed to secure my second win in the category of Best Probate Research Paralegal.